Entrepreneur Tip Of The Day: The Key Is To Just Do Something And Don't Stop

Entrepreneur Tip Of The Day: The Key Is To Just Do Something And Don’t Stop

Are You Willing?
You Are Not Alone
This Is Why Being a Blogger Is a Lifestyle Choice
Does It Matter What I Wear?
Blogging is not fun
This Amazes Me About Us
Let’s Chat About Failure And Failing Up
So What Is The Pattern To Success?
Do You Feel Crazy For Wanting To Be An Entrepreneur?
Why I Must Hustle Harder To Achieve My Goal 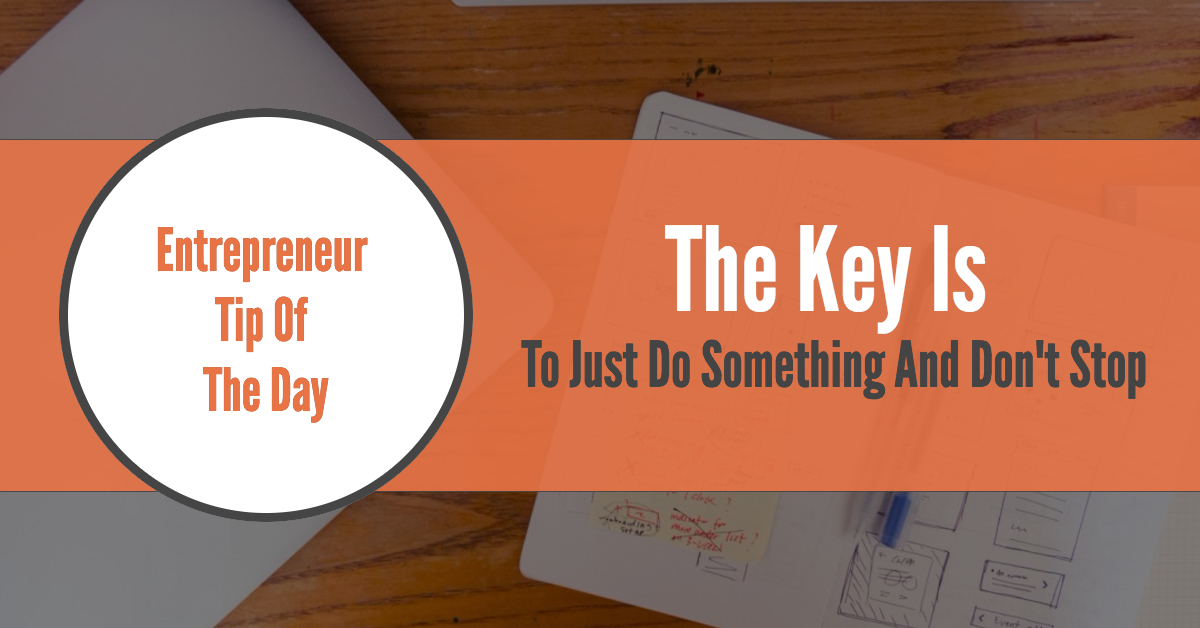 There are exactly eleventy billion webinars for you to attend today.

If that isn't enough for you to think about, there are also one million six hundred and seventy two motivational quotes for you to read.

When you are done with all of that you will absolutely want to try something new in your business. It turns out that there are a lot of new shiny ideas for us to try. Seriously, if you don't think that your big idea is working out, don't worry because there are seventy million different ideas for you to try.

Bonus: Download a free checklist of the first plugins that I always install on a new WordPress Blog.

But what if instead of trying a new idea, you just kept moving forward with your current idea?

What if you had to earn your way out of your current business idea? What if it wasn't so darn easy to quit? Perhaps there should be a quitting fee or a tax.

What if the key to success is to keep going even when it sucks? Well, I suspect that is the key. Sure, you have to have a good idea right?

Do you remember the Pet Rock?

If one of your friends came to you today and said "Hey, I have an idea for a business. It is to sell Pet Rocks." What would you say to that friend? I would say that you are crazy. Well Gary Dahl, the creator of the Pet Rock became a millionaire.

Guess what, he didn't quit. He came up with an idea and just kept doing it.

Often times starting a business sucks and there are some serious lows before success. That is true of blogging and that is why so many bloggers give up. Success comes to those who don't stop.

Not succeeding at first is part of #entrepreneurship. To keep going is the key.Click To Tweet

Not succeeding at first is part of entrepreneurship

Jordan didn't wake up one day, run outside grab a basketball and suddenly realize that he was the greatest player on earth. He was actually terrible at basketball when he started. The thing about him that is so fascinating is that he made the choice to be great. He didn't stop trying ever. He failed over and over and over again until suddenly he was good. Then he kept trying until he was great.

As you are moving along in your business journey it is important to be open to course correction. Course correction is not the same thing as stopping, not even close. For example, if you are a content creator and you see that your podcast are getting more traction than your YouTube videos or blog posts focus more time on podcasting. You could also analyze what is different between the content and add more of that in your other platforms.

Action is something that you can control

Most of my clients come to me because of a podcast that they heard or a blog post or a referral. This means that content creation is currently super important for me. So I set an action goal for myself and that goal is to create 1,000 pieces of valuable content.

My tip to you is to focus on such a goal and don't stop. This just may be the key to success.

My tip to you is to focus on such a goal and don't stop. This just may be the key to success.Click To Tweet

Yes, I Want To Know The First Plugins That You Guys Always Install!